Luke 7:11-17 NIV – 11 Soon afterward, Jesus went to a town called Nain, and his disciples and a large crowd went along with him. 12 As he approached the town gate, a dead person was being carried out—the only son of his mother, and she was a widow. And a large crowd from the town was with her. 13 When the LORD saw her, his heart went out to her and he said, “Don’t cry.” 14 Then he went up and touched the coffin, and those carrying it stood still. He said, “Young man, I say to you, get up!” 15 The dead man sat up and began to talk, and Jesus gave him back to his mother. 16 They were all filled with awe and praised God. “A great prophet has appeared among us,” they said. “God has come to help his people.” 17 This news about Jesus spread throughout Judea and the surrounding country.

What a tragic life this poor widow woman had encountered. Bereft of her husband and deprived of her only son it appeared she had little prospect for hope of a satisfying future. What would she do and where would her future journeys take her? Who would have thought this procession of death would begin an impossible encounter of life!

Her home, the town of Nain, was located just south of Nazareth in the area of Galilee. Alfred Edersheim1 claims the city had at least six roads leading in making it a semi-active and affluent town. According to archeologists there are rock-hewn tombs to the west of Nain, on the road toward Nazareth, and Edersheim writes the unfenced burying-ground was about a ten minutes walk from the town. We read that Nain was large, prosperous, and significant enough to support a town gate for protection. 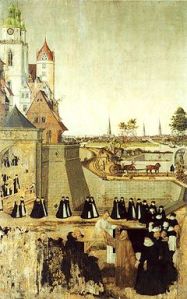 It was at this entrance we find the colliding of death and life. Verse 11 reads a large crowd was following Jesus into this community. The very next verse indicates on the way out was a funeral procession; it too had formed a significant amount people who were mourning the loss of the widow’s son. As the two groups approached the town gate, no doubt, the sobering reality of death would prevail in the right-of-way causing the grief of this widow to become most apparent to both groups.

Did the Savoir know the specifics of this procession? Was He told the expired young man was the only son of a widow? The Lord Jesus, though familiar with human suffering, was no fan of human anguish. Somehow, whether divine or natural, He had become acutely aware of the widow’s plight and was moved of heart to do something for her. Would the words, “Don’t cry” have been enough to stop the women from her mourning and tears? I rather doubt it. And then we are told He reaches up to touch the bier and commands, “Young man, I say to you, get up!” Without touching the dead in accordance with Mosaic Law, the Prince of Life confronts death and resuscitates the widow’s son to the glory of God. Just as suddenly as the son sat up a very different atmosphere from both crowds become one and united in a sense of awe—“God has come to help his people.”

Too many individuals have met the kind of human suffering of this woman. Others have been pressed with different types affliction, maybe not as severer, but none-the-less, painful. Bereft of hope, with little or nothing of satisfaction to look forward to, life becomes a dark night of the soul. Maybe it arrived by foolish choices, or perhaps the suffering was thrust upon them like Job of old, without any self-infliction. Either way the Savior’s heart is moved in compassion toward the truly contrite. The issue is not whether you deserve help, the answer is “are you contrite in your need for relief.” God will never despise the humble with whom suffering has taught great lessons. And, it’s with those hopeful words, “Don’t cry” and “I say to you, get up” that the distressed are relieved to find satisfaction once again. Remember these words no matter how difficult the trial, “God has come to help His people.”